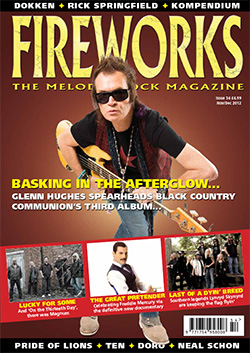 Full Houze is a five piece rock band (the type with two guitars to give you a clue on their style) from Thessalonika, Greece. The band´s sound is Southern Rock with influences clearly based on the likes of Lynyrd Sknynrd and the Allman Brothers. Certainly Panos Doucas on vocals has got a very realistic American accent and the guitar sounds are quite in keeping (I am reasonably sure it is a Les Paul and Fender Stratocaster dual guitar attack).

The songs are based around strong riffs with a good vocal delivery and there are memorable tracks on display here, most notably ´Streets Of Town´ itself with a really great extended guitar solo which lets loose. There are a couple of tracks which are a bit dated in sound and style such as ´Dancin´ Doll´ which has some very 70s lyrics and ´Draggin´ Around´ which is somewhat predictable. Having said that, the guitar duel on the latter track is good fun.

On the other hand, there are some surprises as well in this album; ´Last Ride´ has a Johnny Cash style vocal with a very country and at times Shadows-esque guitar sound behind it. On tracks such as ´What You Get´ and ´Copperskin´ (an instrumental), the guitarists Gioros Keratsopoulos and Miltos Veloukas really demonstrate a mastery of this genre and provides a testament to their years of playing live together.

Two of the strongest songs on the album appear at the end, these being ´Break Away´ and most notably ´The Road Always Goes On´. The latter is a very clear nod to the road songs of Lynyrd Skynyrd and Blackfoot. Interestingly, the press release references Full Houze as being “the band that bikers love the most” and you can see why.

The packaging of the CD – a digipack with a gatefold lyric sheet is very professional and adds to this good album with its strong tracks (on the whole) and a very pleasing delivery from the singer and band.